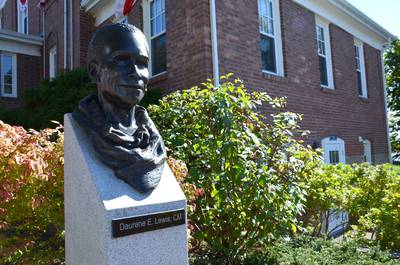 ANNAPOLIS ROYAL, NS – She was described as a remarkable and extraordinary woman, an ethical person with high moral values, a renaissance woman – and a friend.

Daurene Lewis would have been 75 years old on Sept. 9, 2018 when friends gathered at the little plaza outside town hall to honour the woman who grew up in a racist era to become the first black, female mayor in Canada.

But that was not all she accomplished in a life that included so many interests that Nova Scotia Premier Stephen McNeil referred to her as a renaissance woman with a personality bigger than the town — “One, quite frankly, that made you come alive.”

McNeil was one of Lewis’s many friends who packed the small plaza to pay tribute to the woman who used to own a weaving shop directly across St. George Street from town hall.

“The death of Daurene Lewis on January 26th, 2013 is one of those events where for me time stood still,” Francis said. “The news of her death was so shocking and unexpected that I, for a few minutes, felt there had been a mistake.”

Lewis died at the age of 69. She was a great-great-great-great-great granddaughter of Annapolis Royal’s other favourite daughter Black Loyalist Rose Fortune, said to be North America’s first female police officer.

The Sept. 9 gathering was to pay tribute to Lewis in a ceremony titled ‘A Life of Excellence,’ that included the unveiling of a bronze bust of Lewis by famed artist Ruth Abernethy, and dedication of the plaza in the former mayor’s name.

The event was conceived by current Mayor Bill MacDonald who received full support from council. Community members contributed funds towards the sculpture worth more than $20,000.

Mayann Francis described Daurene Lewis as self-confident, a staunch monarchist, someone who respected tradition, and a proud woman, who happened to be a proud black woman.

“She wanted to be judged for her talents and intellect,” Francis said, describing her further as a caring, ethical person with high moral values.

“To be here today to witness the Town of Annapolis Royal pay tribute to this phenomenal woman, this powerful, hard-working, beautiful woman, this African Nova Scotian woman who set the standard for excellence for everyone to follow, is indeed a privilege and an honour for me, and I hope for everyone here, to be part of this historic occasion,” Francis said. “I miss Daurene very much, but I still feel she’s around. What the town is doing today, on what would have been her 75th birthday, means that her influence and her legacy will live on for ever, and ever, and ever.”

McNeil said Lewis not only helped her family, but the town, the county, the province, and Canada.

McNeil remembers the hugs he received from Lewis.

“She grew up in a time when racism was rampant in this province, quite frankly, and she didn’t let that make her bitter,” McNeil said. “It empowered her to make a change — that every Nova Scotian can see themselves in the vision Daurene had for this province. And I am thrilled that my life path intersected with hers.”

Lewis ran for the provincial Liberal party in 1988, making her the first black woman in Nova Scotia to run in a provincial election.

“As the Premier well knows, when we got elected together in 2003, one of the first people contacting me was Daurene Lewis,” said Leo Glavine, minister of Communities, Culture, and Heritage. “She had to challenge you. She had to find out what you wanted to do in this province — bring to this province as an elected official — because as we know the first black mayor of a community in Canada had already made a remarkable impact here.”

Glavine said Lewis was interested in his thoughts as an MLA.

“The one thing you could always count on when you spoke with Daurene was the fact that she was going to challenge you in some way,” said Glavine.

“But what a life. What a memory. The Town of Annapolis Royal, our province, indeed our country is richer because of her life,” he said. “And our community and our province is much stronger for the contribution Daurene Lewis made – and her legacy will live on. And if I leave any little note on my desk as the minister of Communities, Culture, and Heritage, it will be at some point in the future to have Heritage Day in her memory.”

Dr. Geraldine Browning of the Valley African Nova Scotian Development Association and a recent recipient of the Order of Nova Scotia, also spoke and recounted times with Daurene Lewis – including trips to Frenchy’s. The association was integral in the development of historical information now incorporated into the Daurene E. Lewis Memorial Plaza.

Tony Ince, minister of African Nova Scotian Affairs, gave those gathered some background on Daurene Lewis who was a seventh generation descendent of Black Loyalists who settled in Annapolis Royal in 1783.

“She proudly upheld her family’s legacy of hard work and tremendous accomplishments, including becoming the first black (female) mayor in Nova Scotia and Canada,” Ince said. “She was also the first African Nova Scotian to run for a provincial election.”

Ince said that aside from her political achievements, Lewis held many other lifetime successes including:

— becoming the executive director of the Women in Business Centre at Mount Saint Vincent University,

— being a business owner.

“Dr. Lewis was added to the Nova Scotia Black Cultural Centre Wall of Honour and named a Member of the Order of Canada,” said Ince.

“Many of Dr. Lewis’ words inspire me, specifically: ‘If I could teach one thing to the next generation, it would be that no one should accept the status quo,’” Ince said.

“As Minister of African Nova Scotian Affairs, I am proud to stand here today to pay tribute to the late Dr. Lewis. It is a special honour to be part of this dedication ceremony and unveiling of a gold bust of Dr. Lewis on the 75th anniversary of her birth.”

Ince said our communities are richer and stronger thanks to the ingenuity, hard work, and leadership of African Nova Scotians. “Dr. Daurene Lewis is a true inspiration and her legacy will never be forgotten,” he said.

Lewis’ nephew Dr. Peter Nkansah said since his family arrive here in 1784, the town and province have been very kind to them. “The two words that really come to mind are gratitude and humility,” he said.

“It really is humbling to see all the people come out on such a wonderful September day – happy birthday Aunt Daurene – to celebrate someone who absolutely was terrific,” he said. “Terrific in a multi-dimensional way: as an educator, as a nurse, as a historian, as a mayor, as a politician, as a shop owner. And I’m looking at her store right across the street.”

Peter Nkansah, the son of Daurene Lewis’ sister Avis, was visiting Annapolis Royal with wife Chantal and his children Maya, James, and Emma. As a young man he worked for a summer at his aunt’s weaving shop and remembers attending a Jackson 5 concert with her at the CNE in the early 1970s.

The thread of Lewis’ loom is also a metaphor for the thread that runs through time, through geography, and through families.

“I will tell you that Emma’s middle name is Rose,” Nkansah said, his voice choked with emotion. “That was a promise that I made at Daurene’s service back in Halifax a number of years ago. We knew that we were pregnant at the time and I said ‘well, the roots running as deep as they are, and all the kindnesses that have been shown, we’re going to keep it going.’”

Later, in town hall, after Eileen Kelleher with the Daurene E. Lewis Memorial Committee spoke, and after artist Philip Bailey unveiled an artistic map that represented Daurene Lewis’ life, Emma Rose Nkansah, big sister Maya, and brother James snuck into the room across the hall and each one took a turn sitting in the mayor’s chair. Current Mayor Bill MacDonald sat on the edge of his desk and smiled.