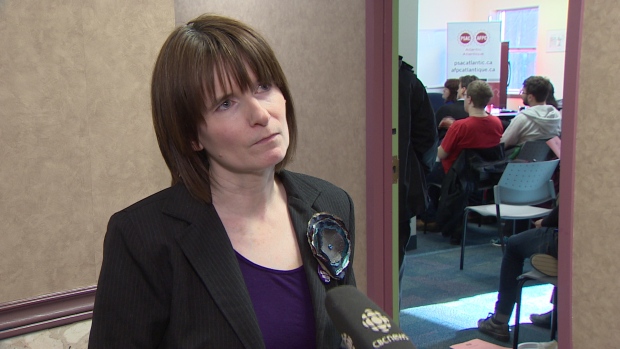 Christine Saulnier is the Nova Scotia director of the Canadian Centre for Policy Alternatives. (CBC)

Nova Scotia communities that are majority Indigenous or African-Nova Scotian had the highest rates of child poverty in the province in 2015, according to the latest report card on child and family poverty by the Canadian Centre for Policy Alternatives.

Thanks to the reinstatement of the mandatory long-form census, for the first time in a decade, the group had access to figures based on self-declared ethnicity, as well as the usual geographically based data.

According to the study, child poverty rates varied from a low of 3.9 per cent in Fall River to a high of 72.7 per cent in Eskasoni. The figures are derived from tax returns and the geographical information is broken down by postal areas.

Christine Saulnier, one of the authors of the annual study, says it’s clear whatever policy or programs are developed to improve the situation for families living in poverty, the unique needs of some communities need to be taken into account.

“Obviously one of the root causes that we are not rooting out, not really addressing, are those related to race and discrimination and the additional barriers that some of our children and families are facing,” Saulnier said.

When it comes to visible minority communities, the centre found 67.8 per cent of Arab children in Nova Scotia were living in poverty. That’s considerably more than the 43.3 per cent of Arab families in a similar situation across the country.

Among families of Korean heritage in Nova Scotia, 50.6 per cent were living in poverty, compared to a national average of 35.2 per cent.

According to the report, “black children make up 43.7 per cent of visible minority children in Nova Scotia and 39.6 per cent of these children are living in poverty.”

Saulnier said the figures point to a need for officials to look at solutions differently.

“If we’re creating employment, we need to consider what the gender and racial barriers are,” she said. “If we’re considering policies where we want to impact more Nova Scotians, then we have to put a rural lens on and say what’s happening in rural that’s different than what’s happening in Halifax.”

Of the 18 communities with poverty rates over 30 per cent, 10 are on Cape Breton Island and the others are in rural counties, including Yarmouth, Digby, Hants, Cumberland and Guysborough.

Overall poverty rates have dropped one per cent since the last report card. That means there were about 1,600 fewer children living in poverty in 2015 than in 2014.

Nova Scotia had the highest poverty rate in Atlantic Canada and third highest in the country behind Manitoba and Saskatchewan.