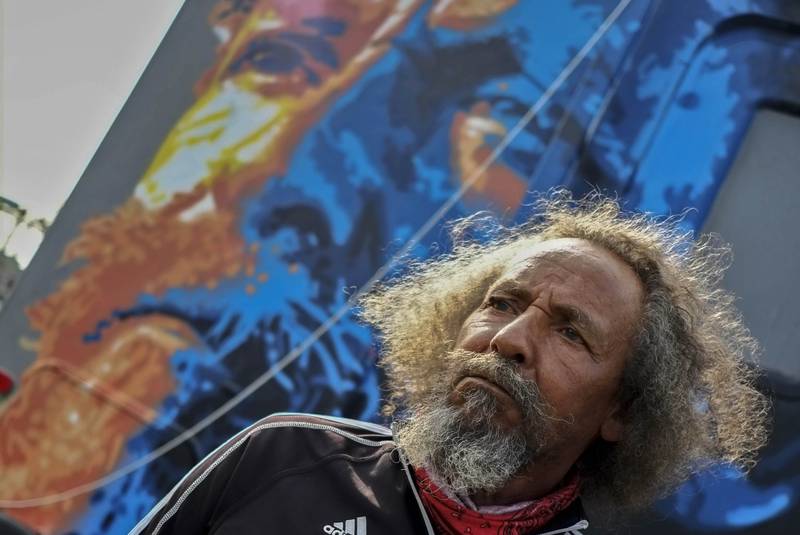 Eddie Carvery is bundled up in three layers inside his trailer, which is hand painted with his face on it and plastered with Africville Protest in bold letters. It’s where he and his long-standing fight for reparations and justice live year round.

“I’m here and I’m here for the long run, until they recognize what they did to Africville,” said Carvery, 73, who is also sitting next to an electric heater on this chilly September day.

His grandson Eddie Carvery III looks on, as the elder Carvery recounts memories from the last 50-plus years. In that time span, he’s fought eviction orders, heart attacks, the cold and racially motivated attacks, among other things, in hopes of resurrecting the community he grew up in.

Africville was a predominantly Black Nova Scotian community located on the south shore of the Bedford Basin, on the outskirts of Halifax. In the 1960s, the City of Halifax razed the community in the name of urban renewal — what many, Carvery included, say was an act of racism.

Lot by lot, the homes of about 400 residents were bulldozed to the ground, as was the Seaview United Baptist Church, which was described as the “heart of the community.” The church served not only as a place of worship, but as a social gathering space.

Carvery was enraged by the destruction of Africville, to the point where he “wanted to blow up city hall.”

Instead, he listened to his late mother, who Carvery called his “champion.” She suggested he “come out here and lay out on the ground and start to protest,” which he began to do in 1970, with inspiration from the Black Panther Party, Martin Luther King Jr. and Nelson Mandela.

Carvery expected his protest to “last three months and people would catch on and things would move,” he says, adding, “but no, nothing caught on, nothing moved.”

In 2010, then-Halifax mayor Peter Kelly apologized to the former residents of Africville and promised them a hectare of land and $3 million to build a replica church, now called the Africville Museum, which opened up in 2012.

However, the city did not “put (the) community back” as it was or proceed with a public inquiry for those who once called Africville their home, which Carvery demands to this day. So, his on-again, off-again occupation of Africville and protest continue.

Last fall, the longevity of Carvery’s protest was met with yet another threat: his few trailers, including the one he lived in that housed all his personal belongings, were destroyed while he had an extended stay at the hospital to treat his heart problems.

“I lost everything,” he recalls.

Luckily, his story has drawn supporters over the years, who have pitched in where they could to keep him going.

Last fall, David Ward, an Ontario resident who read about Carvery and the history of Africville while attending a conference in Halifax, was compelled to advocate for Carvery’s cause. He reached out to Jon Tattrie, who wrote Carvery’s biography, and together they launched a GoFundMe campaign to financially support Carvery as he continues his fight.

According to Ward, the fundraiser was sitting around $600 for some months.

Then, after the killing of George Floyd by a police officer in Minneapolis made international news, sparking Black Lives Matter protests in the U.S., Canada and around the world, the fundraiser saw a spike in donations.

That money funded Carvery’s current trailer, which he purchased back in April. Today, the fundraiser is just shy of $30,000.

“It blew me away, it restored my faith in people, to understand that other people supported what I was doing to the point where they … went into their wallet and they funded me,” said Carvery.

“That’s why I’m here now. I would’ve never got back if it wasn’t for the people.”

Carvery credits Floyd’s killing for advancing his cause and the general BLM movement.

“Because that cop put his knee in that guy’s throat, I think that activated a lot of people that were on the fence who just didn’t give them too much thought about it. That gave them the courage and commitment to say, ‘Hey, we want to do something about this, we’re tired of this happening,’” he said.

“But I’m the benefactor.”

All these years later, Carvery, who is surrounded by his grandson and great-grandchildren outside his trailer now, says he doesn’t regret his protest.

“I’ve been through it all. But I’m still here, because I believe what happened was wrong and I believe the only way to fix it is through protesting.”

Carvery says he wants to eventually pass on the torch “to my son, to his son and to his son behind him” to get justice for what happened to Africville.

Eddie Carvery III says “it’s an honour” to continue the fight, having watched his grandfather’s protest start around the time that civil rights activists like Malcolm X and Martin Luther King Jr. were gaining prominence.

“I’d go to school and people would ask me, ‘Who’s that guy who lives under the bridge?’” he said.

“That’s my grandfather and he’s pretty much doing the same thing, fighting for the same reason that they were, but because we’re in Canada, people don’t turn an eye to that and Canadian history isn’t such a pretty one when you really look into it.”

He adds that it’s “frustrating” to see his grandfather “still have to do this and to put himself out here at this age for nothing to be resolved.” But, he says he tries to support his grandfather, learn from him and carry on his legacy “from a different perspective and different era.”

In order to move forward, he says it will take the co-operation of all former Africville residents and other community members in Halifax, so they can all work towards a mutual goal.

“I want to be able to bring everybody together, because that’s the only way it’s ever going to be settled and satisfied,” he said.

“I want to see a future, just like everybody else, for Africville. I don’t want it to just be a park, I want it to be a place where people can flourish.”

For now, the elder Eddie Carvery remains firmly in his place.

“I’m fighting for change. I’m not going nowhere as long as God leaves me here. Until we get justice, I’m here,” he said.