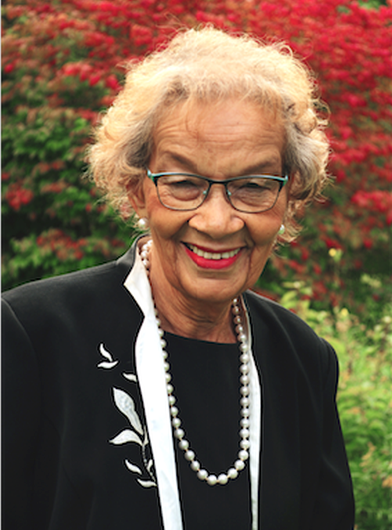 GIBSON WOODS – Geraldine Browning learned to give without the expectation of receiving something in return at a young age.

“You can have all the money in the world and you can die lonely,” she said.
“The only thing you’re going to leave behind is the love.”

Browning, originally from East Preston, vividly recalls a day from her childhood when someone paid her ten cents for doing some housecleaning work, and her mother promptly told her to return the money.

Money was scarce in Browning’s early years, but faith was far from in short supply.

“I learned about Jesus on my mother’s knee,” she said, noting that her father died when she was six, and there was a time her mother was only permitted to keep four of her seven children as a widow.

Her mother eventually remarried, and their family was reunited and grew to include 16 children. But Browning has always remembered the lessons learned as a result of their hardships.

“Whatever I do, I do it from my heart. That’s what my mother taught me,” she said.

This approach to life has served as the motivation for Browning’s decades of advocacy work and community service.

Browning received an honorary Doctor of Humanities degree from Acadia in 2014. More recently, the proud mother of nine children learned that she is one of five 2017 Order of Nova Scotia recipients.

“Her vision is a Nova Scotia where no form of discrimination exists. She advocates for the protection of women and children against violence and abuse. She promotes literacy. She promotes education as a means of building understanding and compassion,” the Order of Nova Scotia website reads.

The long-time Gibson Woods resident carefully worked compassion into every role she’s undertaken, be it in nursing, teaching or community outreach. She’s grateful someone felt she was worthy of the Order of Nova Scotia distinction.

“I want to find out who was the instigator so I can thank them,” said Browning.

Browning’s especially proud of the fact that in her previous service with the school board’s disciplinary committee, she never voted for a child to be kicked out of school.

“I felt that we needed a teacher that just works with children with behavioral issues. I think we’re all made to be loved,” she said.

“When we don’t get that in our lives we grow bitter.”

Browning has a wall of plaques in her home that she’s earned through volunteer and advocacy work. She’s thankful for the recognition, but not driven by it.