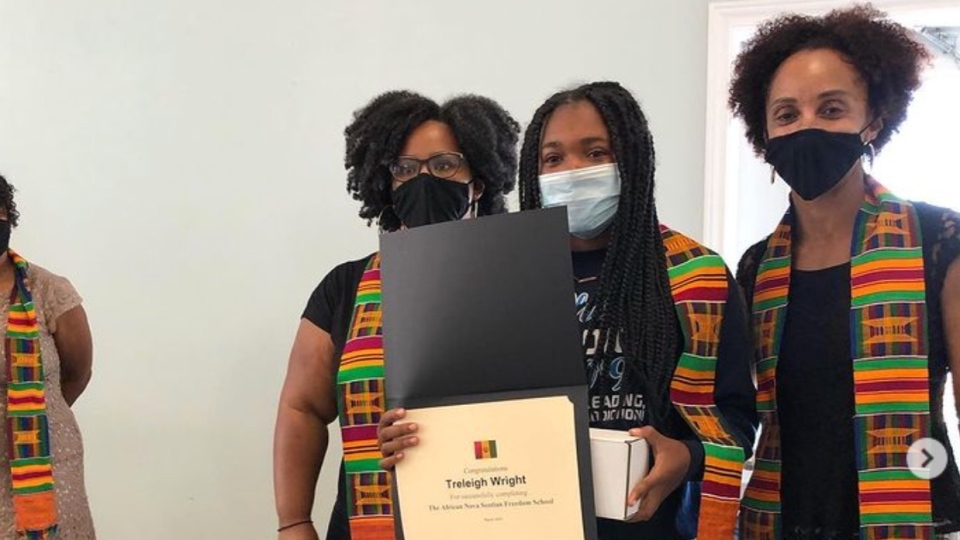 “The month is a way to try and get non-Black people to contextualize what the Black experience means,” Nadia Brown, associate political science professor of American studies at Purdue University in Indiana, told CTV News Channel on Monday.

“We can use this month as a way to teach people about the rich history and legacy of people of African descent throughout the world,” she said, adding that there is still a lot of work to be done to regularly incorporate the voices of Black people.

Brown said the ”summer of racial reckoning” served to show that “there is an unequal world [where] people of African descent have different lived experiences, different relationships, particularly with police and policing.”

Jerisha Grant-Hall, the chairperson for the Newmarket African Caribbean Canadian Association, told CTV News Channel on Monday that to be Black woman “has always been somewhat of an exhaustive thing” but that this year’s celebration of Black voices “feels a little heavier.”

Brown said the police killing of George Floyd spurred on non-Black people seeking out anti-Black racism literature. That and organizations pledging systemic change were positive steps, she said. But Black History Month offers yet another reminder to go further.

“We, as educators, believe it’s very difficult to become what you don’t see,” Rachel Zellars, an assistant professor of social justice and community studies at Saint Mary’s University in Halifax, told CTVNews.ca in a phone interview on Monday.

“It is the responsibility of teachers to make sure that all children in their class have a mirror,” she said.

Because of the protests, Zellars and seven other educators co-founded the African Nova Scotian Freedom School — a month-long, mostly virtual course to highlight Canadian Black history, as well as weightier subjects such as transformative leadership, activism and abolition.

“We focused on the contributions of African Nova Scotians since the 1700s, leaders particularly who were active of black political protest in the ‘60s, ‘70s, ‘80s and ‘90s here,” she said. The school graduated 25 students last August, a number they’re hoping to increase this year.

Zellars said two of the pillars of the school are teaching leadership and examining anti-Black racism, the roots of which can be traced back to the trans-Atlantic slave trade.

“It happened over four centuries and literally took our people and scattered us all over the world,” she said, explaining that “in turn, left behind a legacy of Black demonization,” which has a direct impact on Black students’ lives in 2021.

She said understanding that history can give context to lingering effects of systemic racism and “help students understand why a single isolated act of violence in this single city, in a single state, in one country caused 60 other countries and every major city to erupt in protest.”

Her school isn’t the first in Canada. In 2016, Black Lives Matter Toronto crowdfunded their own Freedom School, inspired by the 41 similar schools in the U.S.. They were created by the Student Nonviolent Coordinating Committee during the mid-1960s, and went on to serve 2,500 students.

The original Freedom Schools were created as a way to ensure certain histories were taught, including the abolition and civil rights movements; and Reconstruction — the short-lived push following the U.S. Civil War to redress the inequities of slavery that was ultimately cut short by practices that ushered in the Jim Crow era.

Zellars explained it’s incumbent on all educators and Canadians to move away from simplistic narratives such as Canada being the end of the Underground Railroad, and not ignore the sordid history of slavery in the colonies that would become Canada. She said we have to move past Canadians solely looking down on their southern neighbours when it comes to race relations.

“That simple myth is the foundation of our international reputation and local reputation of being safe and being good in relation to the United States,” she said, referring to Canada.

She said nuance is essential for everyone to understand what Canada is today for many Black people, including disparities in health care and overpopulation in prisons.

YOU NEED TO TELL THESE STORIES: TEACHER

Other groups in Canada are also promoting Black History Month by creating online resources for parents and educators.

One such group created an interactive choice board that includes topics such as art, activism and notable figures in Canada and the U.S. The segments of the board lead to class outlines, biographies on notable Canadians, and advice depending on grade levels.

One educator tweeted that she hopes her colleagues use the resource to “infuse Black excellence and Black histories into the tapestry of your curricula.”

The digital bilingual resource uses the template of the Periodic Table of Elements but instead of elements, highlights different topics such as Black government figures, entrepreneurs, LGBTQ+ figures and other Black Canadians who were the first in their field to do something.

“In this moment where so many students are learning online, the digital version of the Periodic Table of Canadian Black History is a true gift to learners and educators alike,” the group said in a press release.

The table, which organizers encourage other schools and teachers to fill in with their own figures, includes many contemporary Canadians, including Black trans activist Syrus Marcus Ware and Olympian Perdita Felicien. This is to instill the idea that Black history is still happening.

A bedrock of Zellars’ Black history program is the idea of children carving out their place in Canada today and leading the way.

Her program examines how historically, lots of forms of Black leadership and inspiration existed beyond the most commonly known stories.

For example, she tells students about an impoverished, illiterate Black woman who was taken from Boston to Halifax to be enslaved in the late 1700s. But she knew to hire a lawyer and managed to petition for her freedom there.

She and her colleagues use historical examples to prompt the students: “what kind of world would you like to shape? And how would we do that?”

Brown echoed that sentiment, saying people needed to “celebrate the differences” not just between Black and non-Black people, but also the nuance among leaders in the Black community.

“[It’s] understanding that our history is complex and nuanced and that there are people who have multiple different visions and what unity inequality would look like,” she said.

“You need to tell those stories and really examine the structures that have enabled people to have these different recognitions of what black humanity and fullness of equality would look like.”