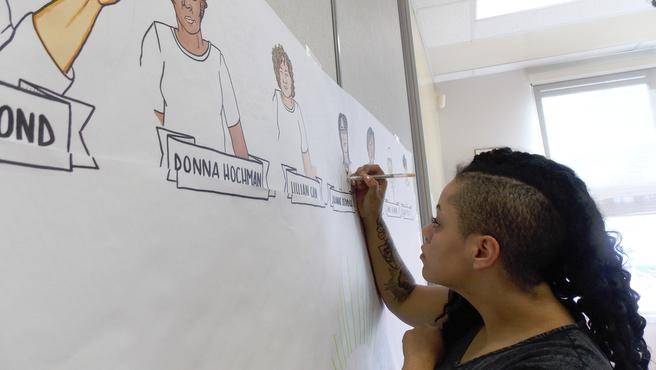 GUYSBOROUGH — It’s amazing what kids get out of stories from their elders. “You had to do chores before you went to school. You had to pee outside,” exclaimed Tera Dorrington’s daughters after hearing from community elders at the Kuumba pilot project held in Guysborough earlier this month.

The Kuumba project, organized and implemented by the Delmore Buddy Daye Learning Institute (DBDLI), works to bring youth and elders together in African-Nova Scotian communities to share stories and create artistic representations of those stories. The pilot for the project was held in Guysborough at the Afrikan-Canadian Heritage and Friendship Centre (ACHFC) on Nov. 4 with elders and youth from the communities of Upper Big Tracadie, Sunnyville and Lincolnville. A second rollout of the project was held in Cherrybrook on Nov. 18.

Sylvia Parris, CEO of the DBDLI, explains that Kuumba is a recognition about who we are as a cultural community. “Kuumba speaks to that inherent creativity in the way we understand ourselves. . . . It’s allowing people to talk about themselves, to express themselves in ways that are most comfortable to them.”

The idea for the Kuumba project came to Parris when she observed youth and elders interacting at various family and community events. “I had this idea: Let’s have a way for people to tell their stories and a way for youth and children to capture that in a way that is useful for them artistically.”

Taking hold of that thought, Parris worked with the Department of Communities, Culture and Heritage and artist Kim Cain to develop Kuumba: Telling Our Individual & Community Stories.

On the day of the event in Guysborough, participants gathered at the ACHFC, took part in an informal introduction circle, and listened to elders impart stories from their past. They had lunch together and then artistic facilitators Kim Cain and Beverly Bowden instructed the youth on the translation of these oral histories into the visual medium.

“With the art component, we wanted to break down the process of picture creation and that translation from spoken word to a drawing. . . . As an artist, but also as an educator, what I wanted to do was educate the youth as to how to construct a picture, what the composition might look like, and how to think about the details and how those details work to tell a story,” said Cain.

Dorrington watched while her two children participated with other youth and elders at the event. Along with being a mother, Dorrington is also vice-principal of Chedabucto Education Centre/Guysborough Academy, the school site that hosted the event. She said the benefit was “that my daughters are able to experience, first-hand through oral story telling . . . their heritage, their culture. It was really cool to see them take those stories and make it into art — draw a representation of how they interpreted the stories,” she said. “It was really nice to see that interaction and the kids liked listening to the elders and the elders liked sharing their stories and reminiscing,” said Dorrington, adding her children keep asking when they can go back to Kuumba.

As the Kuumba project finds its footing, the project leaders have learned a few lessons from the pilot project in Guysborough which they will take into account as they move forward. “What we did learn was to be mindful of our assumptions. When elders were talking about a one-room school, we assumed that was self-explanatory but it wasn’t,” Parris said.

They also learned that a shared meal was a beneficial component of the program. It allowed time for participants to interact in a non-structured, informal environment, which helped cement the connection between elders and youth, she said.

“I am hopeful when young folks hear those stories they will be able to think about what is happening right now, with them, and see a connection,” Parris said.

The DBDLI has plans to take the Kuumba to African-Nova Scotian communities across the province and hopes to turn the resulting art work and stories into a book. For more information on the project and the Delmore Buddy Daye Learning Institute, visit the website http://dbdli.ca.