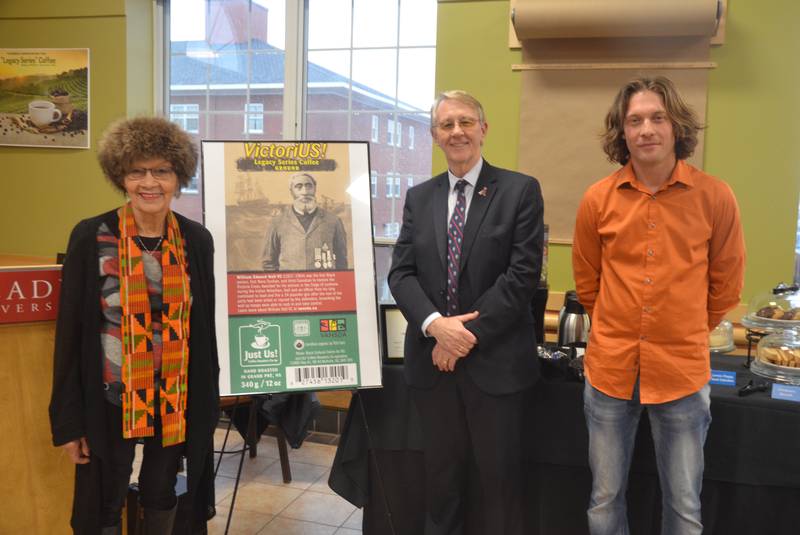 WOLFVILLE, NS – It will open eyes as a morning coffee and as a means to promote African Nova Scotian history, all while supporting post-secondary studies and the values of fair trade.

Launched during African Heritage Month, this unique specialty coffee series features labels promoting various historic persons of African descent important to Nova Scotia and Canada. The first in the series is a tribute to William Hall VC released under the label “VictoriUS!”

VANSDA executive director Robert Ffrench said he doesn’t think anyone could appreciate how fast the Legacy Series initiative came together, “from a conversation, to a telephone call to a launch.”

Ffrench said it’s important to recognize why VANSDA is doing this. In 2011, the organization instituted the William Hall Heritage Scholarship for students wishing to attend Acadia University.

In the future, VANSDA hopes to help as many students each year through the scholarship as funds will allow. Currently, two students receive the scholarship every year with the university providing matching funds up to $1,000.

William Edward Hall VC (1827-1904) was the first Black person, the first Nova Scotian and the third Canadian to receive the Victoria Cross.

Awarded for his actions in the Siege of Lucknow during the Indian Rebellion, Hall and an officer from his ship continued to load and fire a 24-pounder gun after the rest of the party had been killed or injured by the defenders, breaching the wall so troops were able to rush in and take control.

“This serves not only to promote African Nova Scotian heritage but will also further educate all Nova Scotians from across all races and cultures about the contributions of individuals in this part of the region and throughout all Nova Scotia, while also enjoying a great cup of coffee,” Ince said.

Some of the other historical figures to be featured include Rose Fortune, Portia White and Marcus Garvey. As Ince pointed out, Garvey is not a Nova Scotian but in 1938 he visited Sydney, where he delivered a speech that became the basis for the Bob Marley’s Redemption Song.

VANSDA chairwoman Geraldine Browning said the theme of this year’s African Heritage Month in Nova Scotia is “Our History is Your History” and education plays an important role. The unique history of African Nova Scotians is interwoven with the past, present and future of all Nova Scotians and the theme also forms the basis of Legacy Series coffee.

She said the historical figures to be featured in 2019 “share a unique and sometimes unknown bond” in the building and shaping of communities here and across the country.

“Today I’m pleased to be part of another step in a journey to bring our history into the hands and homes across the province and beyond,” Browning said.

Acadia University President Dr. Peter Ricketts said that what we eat and drink is important beyond the impact it has nourishing our bodies.

“Having ethical food and good food and food that is actually contributing to making for a better world is part of the learning experience and certainly I want it to be part of the Acadia experience,” Ricketts said.

Just Us! Coffee Roasters general manager Joe Pittoello said he is looking forward to making the stories of the historical figures featured in the Legacy Series better known.

He said Just Us! is a worker-owned co-op that is community-focused by nature and it was the first fair trade coffee roaster in Canada. He said they are authentic in their commitment to fair trade and began promoting it before it was fashionable because it was “the right thing to do.”

Chartwells Higher Education Dining Services regional director of operations Andy Murray said they were presented with the opportunity to support and help launch Legacy Series coffee at Acadia through a partnership with Just Us!

Through the project, Murray said that VANSDA, Just Us!, Acadia and Chartwells have aligned values with a focus on supporting local, championing sustainability through fair trade, supporting small producers and supporting community partnerships.

He said Legacy Series coffee would be available at Acadia, at the four Nova Scotia Community College campuses they serve and at the University of Kings College.