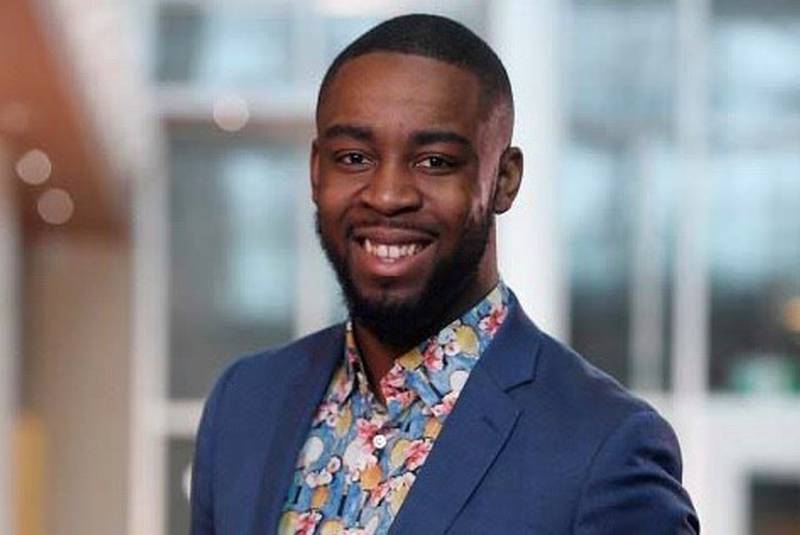 man approached them and started to make racist comments.

“We were sitting outside of the Local Jo (Cafe & Market), just chatting about our research, and he literally walked around the corner on Edinburgh Street and said, ‘What’s a white girl like you doing with a … (Black person)?'” recalled Ajadi.

“I asked him, ‘What did you say? Could you repeat that?’ and he said, ‘She shouldn’t be around … (Black people). She should be dating a white guy,’ and I said, ‘Why do you think that?’ And he said, ‘Well, there’s plenty of brown women in the world you should date.’”

Ajadi captured the majority of the incident, which occurred around 11:40 a.m., on video and posted it to Twitter. That post has since gone viral.

“There was no confrontation before that. We were just sitting on the street and this happened,” he said, adding he was “surprised” that the man continued to make racist comments even after he started recording.

Nicole Arsenault, who was catching up with Ajadi over coffee, said she was “taken aback” and “much slower” than Ajadi at processing what happened because “as a white woman, I’m quite insulated; these experiences are not a part of my daily life.”

“I was really, really angry and confused,” added Arsenault, who joined Ajadi in confronting the man.

‘I had no recourse’

When asked how he feels in the aftermath of the encounter, Ajadi said, “tired, mostly.”

He said he wishes “mercy upon (the man’s) soul” and that he chose to pull out his phone and record the video because he felt it was the only option available to him.

“I had no recourse because as a Black man in Halifax, a Black person in Halifax, I’m not going to go to the cops — it’s not safe,” he said.

“For goodness sake, just two weeks ago, someone was threatened with a noose in Chester and the cops blamed them. Why would I trust these people?”

Ajadi added racism “invariably happens because we live in a racist society, so (there are) people with racist ideas, but also systems that are racist,” but he’s “concerned” that other Black people have to face it in silence because they, too, feel there is no recourse for them.

“For me, luckily I have enough of a platform where I can record that on Twitter and now we’re talking,” he said.

“There’s a whole bunch of people in this city, in this province and in this country who don’t have that recourse and just have to swallow that rage and the sadness and the paralysis that comes with it.”

Arsenault said she’s not sure “to what extent the police have a role to play” in these sorts of encounters and that she trusts Ajadi’s “assessment of this situation and strategy to try to build empathy among people” by sharing it on social media.

Arsenault noted she has been witness to people “suffering this kind of violence before” in Halifax in the past, so she’s “not surprised” that it happened.

But, she said it was the first time she was “so intimately involved” and felt “really sad” that Ajadi was attacked “just because he had the audacity” to sit and have a coffee with her.

“It certainly was a really awful reminder that people move through space in the city very differently and that I occupy privilege everyday and I don’t have to have this happen to me everyday,” said Arsenault.

In a statement, Lindell Smith, city councillor for Dist. 8, where the incident occurred, said the video was “disturbing” and condemned the comments made by the individual in the video.

“My heart was broken when I saw that. It’s not the kind of impression we want people to have of Halifax and it’s important for people who live in the Halifax Regional Municipality to stand up and say we’re not going to tolerate this,” said Cleary.

Cleary said he was similarly “not all that surprised” to learn of the incident that Ajadi and Arsenault encountered, adding “we hear about racism everyday here in Halifax, across Canada, around the world,” but it’s become more apparent with technology that can record it in real time.

According to Cleary, anti-racist rhetoric from elected officials in Canada and the United States is also making “small minded racists that were maybe more guarded about their views seem more emboldened to espouse them more publicly now.”

He noted the Halifax Regional Municipality has taken steps to dismantle systemic racism, such as voting against an armoured vehicle purchase for the Halifax Regional Police and instead funding anti-Black racism initiatives, but said more needs to be done to “make this city a fair and just society.”

“As we see more of this kind of (anti-racist) rhetoric that is pushing this kind of narrative, we need to fight against that with every opportunity that we have through the police, through the city mechanisms for including people and engagement,” he said.

While he’s received lots of messages of support after publicizing the encounter, Ajadi said “the fact remains that we live in a fundamentally racist society and I don’t know what needs to be done about that.”

And, despite feeling “unsafe” in Halifax, Ajadi said he isn’t going to stop going out for a coffee or carrying out his normal activities, just like racism hasn’t stopped thousands of other Black people from doing so, who have been here who have “become part of communities of support and of care.”