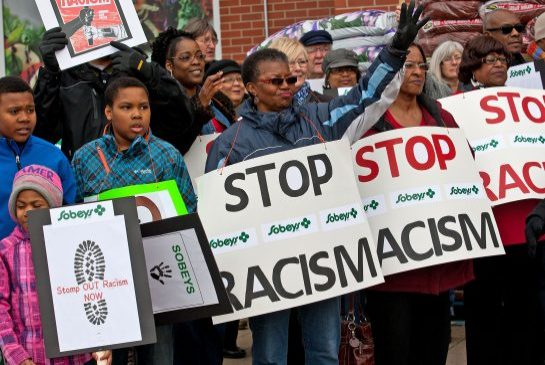 A church association is calling upon the public to let their “economic power” be a voice against racism in Nova Scotia by boycotting Sobeys.
On Monday, the African United Baptist Association of Nova Scotia (AUBA) said in a release they had agreed in a Saturday meeting to boycott the grocery chain until Sobeys apologizes and implements recommendations from the October 2015 human rights inquiry that found Andrella David of Upper Hammonds Plains had been discriminated against, based on her African Nova Scotian race and perception of income.

“The corporation may take more notice if you actually make them feel what impact their decision is having,” Dr. Rhonda Britton, pastor at Cornwallis Street Baptist Church and AUBA vice-moderator, said Monday.

“[We’re] letting our economic power be our voice in this issue.”
Britton said although a remedy decision awarded David $21,000 from Sobeys Group Inc. in April after the company had filed an appeal, there’s been no evidence the grocery chain started racial sensitivity training for staff, which was a key recommendation.

David’s racial profiling case involves an assistant manager at the Hammonds Plains Road Sobeys who accused her of shoplifting multiple times in 2009, and said they had caught her on tape.
Even if the store had caught someone “actually guilty” of something, there’s still a better way to handle them than the embarrassing way David was treated, Britton said.
There are about 3,000 people in the AUBA congregations, Britton said, with many more identifying with the group as the largest black institution in Nova Scotia.
“We are hoping that it’s not just a black thing, that other people will support our efforts in this; especially people of faith that say they believe that all people should be treated with justice,” she said.

In an email on Monday afternoon, Sobeys spokeswoman Shauna Selig said the company has had “several discussions” with the Human Rights Commission since the April remedy decision.
“We expect to finalize an overall resolution shortly which will include a withdrawal of our appeal,” she said, but did not give a timeline on when the appeal may be withdrawn.
A rally outside the Hammonds Plains store in March this year was also held to protest the Sobeys appeal and ask for an apology to David from the company, which has yet to happen.
“We can say it, and we have said it, but it hasn’t moved them to act favourably in acknowledging their wrongdoing,” Britton said.