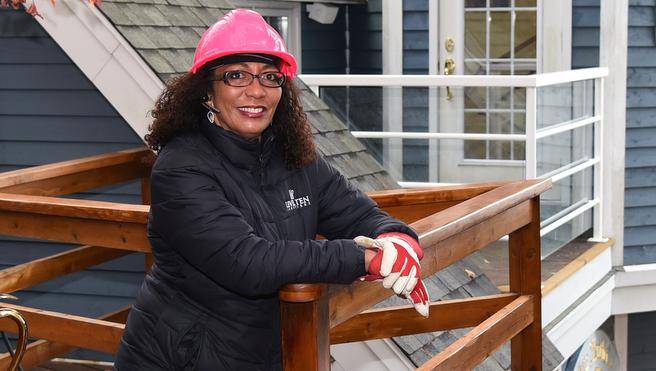 Since he took over his father’s paving operation, Simmons Paving Co., Simmons and his family have been building the business of finishing residential and commercial paving projects — and securing needed employment for the community.

Started in 1974 in North Preston, Simmons Paving Co. was the first black business to be incorporated in Nova Scotia. It has since gone on to receive two entrepreneurial awards in the Halifax Regional Municipality.

“They say to themselves, ‘look, if they can do it, we can do it.’ And if you do a little extra than the ordinary, that’s what makes you extraordinary,” he said.

Simmons’ positive business approach is something he says he inherited from his father, but for business support over the past 20 years, he credits the Black Business Initiative (BBI).

“BBI had an impact on our marketing by setting us up with an advertising specialist about a decade ago for a new logo, branding of our trucks, business cards and signage,” said Simmons.

“But they helped with many business startups with financing options and know who to reach out to in the community for resources.”

That knowledge certainly helped Lisa Coates establish Level Ten Landworks in Purdy’s Wharf last September, but she’s rarely there as she navigates between project sites and suppliers. A background in real estate inspired her to start her own home and commercial renovation business after moving back to Nova Scotia from Massachusetts.

“I don’t know where my business would be today without BBI,” said Coates. “They believed in me and helped my decision and my vision become real by ensuring I was funded.”

Because she was a self-employed woman, most lenders turned her away. “There’s nothing more challenging not getting the start-up capital than you need,” she said.

“When I look back on the past 20 years, I can’t help but feel an overwhelming sense of pride,” said BBI CEO Rustum Southwell.

More than 340 loans and community development grants have been issued to businesses and community organizations, and more than 800 new jobs created over the past two decades.

“We have been able to make tremendous strides toward creating economic sustainability for black entrepreneurs and a better future for our youth,” said Southwell, who has been with the organization since its inception in 1996, and is now back after a four-year absence.

“This is our story and it continues, right now.”

BBI is holding a series of events across the province now and regional events into 2017.