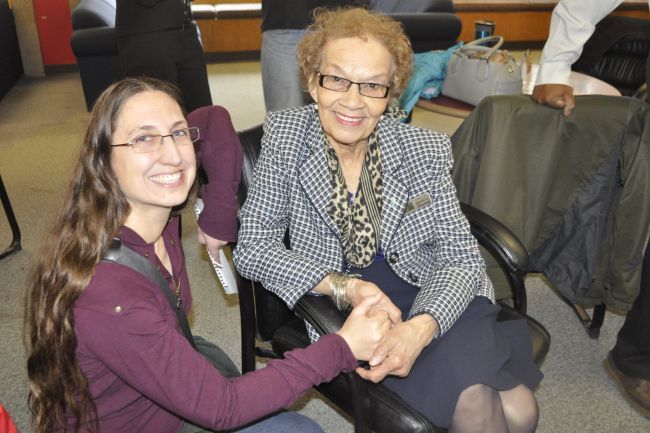 “We know that public education and awareness are key tools in the work to decrease sexual violence,” said Irving, in a media release. “From the Annapolis Valley to the South Shore, community organizations are important partners in preventing sexual violence, and they are making a difference.”

“Sexual violence isn’t typically a topic that is spoken about openly in the African Nova Scotian community,” said VANSDA director Robert Ffrench in the release. “With this grant, we want to build a group of community leaders and mentors, and bring this subject matter into the open.”

During the event April 12, Ffrench said he was happy to launch this ground-breaking initiative in partnership with Acadia athletes.

“We want youth to step up and be accountable, to be leaders in the transition.”

“VANSDA is advocating for change. Sexual violence has to be addressed,” Ffrench said. VANSDA chairperson Geraldine Browning added that change can come about with men helping men.

“The Acadia Students’ Union will continue to collaborate with Acadia University to create a community that celebrates and values sexual health and challenges sexual violence in all forms,” said Gray in the release. “Student leaders will assume roles of responsibility in developing the activities of this project.”

The Prevention Innovation Grants are part of the province’s Sexual Violence Strategy. A total investment of $1.2 million has been promised.

Community Services says approximately 100 applications were received for the grants, which aim to “support community groups and organizations, including youth and underserved populations such as African Nova Scotians, First Nations, and the LGBTQ (lesbian, gay, bisexual, transgender and queer) community, to reach out to their peers and help put creative prevention initiatives into practice.”

– $2,300 to the Middleton Regional High School Gender and Sexuality Alliance for a student-led research project to address sexualized violence against LGBTQ youth in schools

– $4,500 to the YMCA of South West Nova Scotia to develop media literacy and digital citizenship training to help youth between the ages of 12 and 18 become more aware of sexual violence and learn how to prevent it online

– $5,000 to the Sexual Health Centre of Lunenburg County to create a video series for parents on how to talk with their children about healthy relationships, consent and media literacy

– $4,000 to the South Shore Youth Advisory Committee so youth can write and record a song about taking care of yourself and others