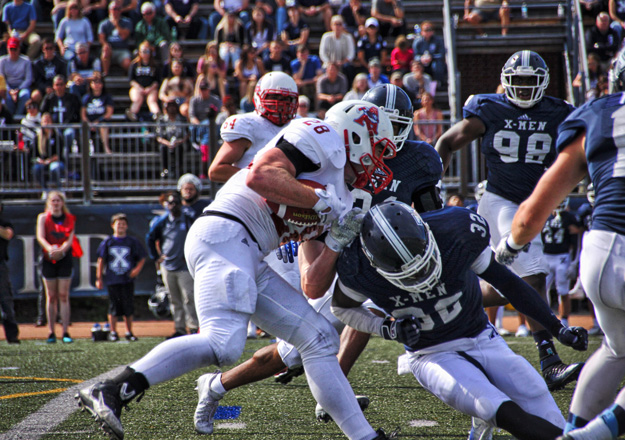 Robert Ffrench, director of the Valley African Nova Scotia Development Agency (VANSDA), says student athletes at Acadia have committed to advocate against sexual violence. “You have a special role to play on campus and back home as role models,” Ffrench told the assembled football players. “You have a privileged position in the school culture with enormous clout.”

At that meeting in New Minas on Aug. 30 a partnership was sealed between Acadia Athletics and the community organization to prevent and reduce sexual violence against women. The players who signed up will be taking a 10-module program called Step Up!. The bystander intervention program was developed by the University of Arizona and the National Collegiate Athletic Association back in 2009. It has spread widely across U.S. campuses.

Ffrench, a former Acadia football player himself, told the athletes that the challenge will be to “look in the mirror as a male. Hopefully you will get personal growth out of this.” Speaking about a willingness to put oneself out for others, he said, “as a bystander if you’re not helping her, you’re helping him.”

Football coach Jeff Cummins also addressed his team – as a dad. He described his 12-year-old daughter and a friend being howled at by males in a car on Main St. in Wolfville. “She was scared out of her mind. She cried when she told me about it. How many of you have little sisters,” asked Cummins.

Roughly half of the athletes put up a hand, then the coach reminded them that after eight or 10 beers things get a little blurry.

Step Up! was one of several new projects with the goal of preventing sexual violence in the region that received grants in April through the province’s Sexual Violence Strategy. VANSDA received almost $30,000 in order to partner with Acadia athletes. In the long run they will become mentors to young African Nova Scotian males.