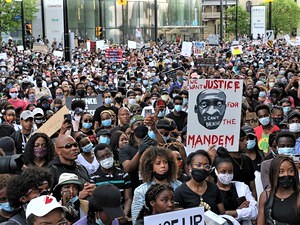 Canadian Forces intelligence officers compiled data on the Black Lives Matter movement in Ontario as part of the military’s response to the COVID-19 pandemic, according to documents obtained by this newspaper.

But a co-founder of Black Lives Matter in Canada says there is no reason for such scrutiny of the organization’s peaceful efforts to raise awareness about racial injustice, raising the question about whether the military’s activities were even legal. The initiative was overseen by the Canadian Joint Operations Command, which directs missions in Canada and around the world. The report on BLM was included among the information collected as the military worked in long-term care homes in Ontario during the pandemic.

The team examined social media accounts to understand how BLM organized its protests as well as to identify the “major actors” supporting the organization. “Protests for social reform after police-involved deaths of George Floyd in Minnesota and Regis Korchinski-Paquet in Toronto continue to gain traction in Ontario,” noted the intelligence report from June, 2020.

The intelligence officers noted there were BLM chapters in Toronto and Waterloo, and produced a timeline of some of the 25 demonstrations in the province. One section in the BLM report titled “Hostile Foreign Actors” is completely censored for national security reasons. Sandy Hudson, co-founder of the Black Lives Matter organization in Canada, said she found the military’s activities very concerning. “I’m not surprised, but I’m deeply disappointed that the Canadian military is spying on people who are simply engaging in the civic process,” she said. “I don’t buy that this has anything to do with COVID.”  She also noted that pandemic safety was one of the hallmarks of the BLM protests, with individuals making sure they wore masks and were physically distancing.

As for claims that hostile foreign nations were somehow behind BLM, Hudson responded that the protests were “not caused by (foreign actors) trying to stir up racial strife. It was caused by the very public execution of a number of Black people.” In a statement, the Department of National Defence noted the information was collected with the aim of increasing the Canadian Forces’ “understanding of the local environment” as the military prepared to work in long-term care facilities during the pandemic.

“In order to ensure the movement of our personnel/vehicles to support Ontario LTCF (Long Term Care Facilities) would not interfere with BLM solidarity activities, preliminary research was undertaken,” the statement added. “To be clear, this work was only done with the intent to avoid disruption to both planned BLM activities and CAF operations.”

The intelligence team examined “core narratives” circulating on social media sites about BLM and noted the protests were peaceful.  Hudson questioned whether the actions of the Canadian Forces were legal. “This says something about how (Canada) views Black people advocating on behalf of their community; that this is something that is suspicious and something to be tracked by the military.”

Two months before the BLM report was completed, Lt.-Gen. Mike Rouleau, head of the Canadian Joint Operations Command, had issued a plan outlining the use of propaganda techniques against Canadians during the pandemic. That plan was later rescinded because of concerns it had gone too far.

In addition, this newspaper also reported last year that a Canadian military intelligence unit monitored and collected information from people’s social media accounts in Ontario, claiming such data-mining was needed to help troops working in LTC homes during the pandemic. Negative comments made by the public about Premier Doug Ford’s government were collected by the military.

The Canadian Forces maintained there was nothing wrong with that initiative since the information collected was from publicly available websites and social media accounts of Ontarians.

Later in 2020, the Canadian Forces public affairs leadership launched another controversial plan that would have allowed military public affairs officers to use propaganda to change attitudes and behaviours of Canadians as well as collect and analyze information from the public’s social media accounts.

The plan was circulated at national defence headquarters in draft form and would have seen staff move from traditional government methods of communicating with the public to a more aggressive strategy of using information warfare and influence tactics on Canadians.

Training for such a capability had already been put in place. The Canadian Forces spent more than $1 million to train public affairs officers on behaviour modification techniques of the same sort used by the parent firm of Cambridge Analytica, the company implicated in a 2016 data-mining scandal to help Donald Trump’s election campaign. In this case, the contracts were awarded to Emic Consulting, a British firm.

The initiative, overseen by Brig. Gen. Jay Janzen, was part of a shift at national defence headquarters to what was dubbed “the weaponization of public affairs.”

Some senior military public affairs officers were not happy with this newspaper’s coverage of the Emic contract and the various other initiatives. At an Oct. 29, 2020 meeting, one of those officers suggested striking back at this newspaper, although details weren’t discussed about how that might happen. Defence Minister Harjit Sajjan, however, denounced such behaviour.

Laurie-Anne Kempton, the assistant deputy minister for public affairs, announced in November that initiatives to enhance the duties of public affairs officers to include influence activities and propaganda techniques were being shut down. Canadians, she noted, “must know that they are not targets.”