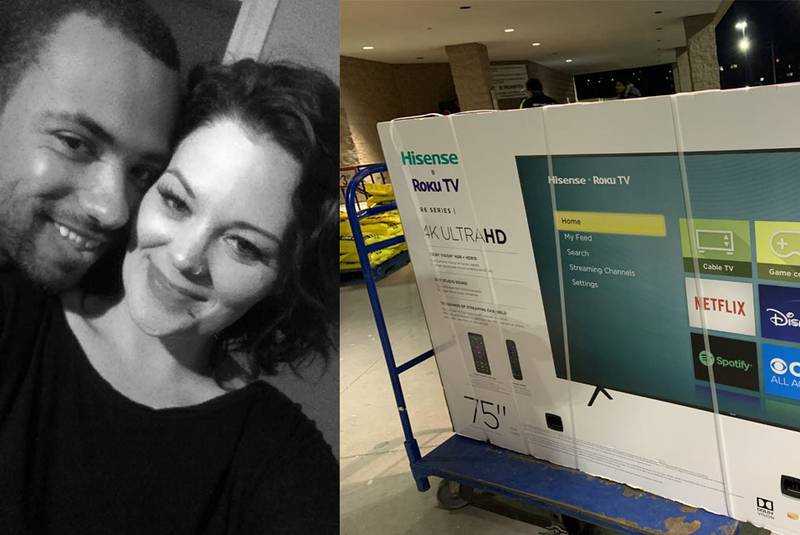 A Halifax couple say they’re convinced that racial profiling was at play when they were stopped for several minutes at the doors to a Halifax Walmart store despite having a receipt for their purchase.

April Lawton and Cadney Flint were at the Walmart on Mumford Road Wednesday night and purchased a new TV. When Flint, who is Black, reached the front door, though, he said a store employee angrily and loudly demanded to see the receipt. Lawton showed the receipt, but says the employee wasn’t satisfied.

She has since talked to the store manager, who told her he watched the video and spoke to the employee.

“He said (the employee) said once we showed the receipt he didn’t care anymore and didn’t want to see it,” she recounted Friday, “I said ‘so why did he do it?’ and he said ‘I don’t know.’”

She said the employee told her at the time of the incident that he owned and ran the store. The manager told Lawton that he is actually the assistant manager.

She posted her experience online, and “since then my inbox has been going nutso with people messaging me.”

Lawton said some people have told her they have worked with the employee and he has acted that way before. Others said they have been customers and been treated similarly by the employee.

“This is not a new thing for him, apparently,” said Lawton.

She said she has no issue with being asked to show a receipt, “but once the receipt was shown, it should have been done.”

But instead, the employee wouldn’t let them go. When he made the threat to call the police, Flint told him to go ahead.

The police didn’t show up. Spokesman Const. John MacLeod said the force received no calls from the store that night.

Lawton said the manager told her he had no idea why she and Flint were stopped from leaving for so long after the receipt was shown. She said separate customers worked to calm her and Flint down during the ordeal.

The woman who was talking to Flint “told (the employee) ‘you’re racially profiling right now. You’re a racist. Buddy, you’re a racist.’ That’s when I think the wheels in his head started to turn and he went ‘uh-oh,’” Lawton said.

She said he then wanted to talk to them off to the side, but they refused.

“The woman who was talking to my husband said ‘you have your receipt, there’s nothing they can do, so leave,’ and we did.”

She said they were held up at the door for several minutes. Flint said he was already upset because as he took the TV off the shelf in the electronics department to take it to the counter there to pay, a different staff member was demanding to know if he had paid for it. That employee then told him he would get a cart for him, “then he starts pushing me out of the way to take my TV to the checkout. I told him I was very capable of taking my own TV to the checkout.”

The employee then crowded him on the way there, Flint said.

Lawton said the couple still isn’t sure what they want to see done about the incident, or what their next steps will be, but feel there needs to be some kind of consequences for the employee.

Walmart Canada spokeswoman Felicia Fefer said in an emailed statement the corporate headquarters is aware of the incident.

“We take these matters very seriously and are looking into the incident. The store manager has since been in touch with the customer,” she said.

“Respect is a core value at Walmart Canada. Walmart is committed to providing a safe and inclusive environment for our associates and our customers.”