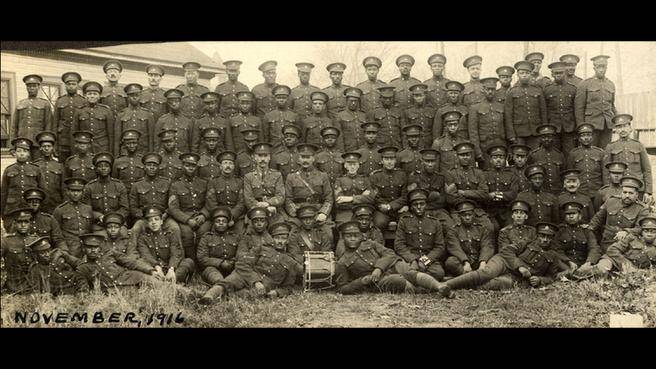 The contribution made by the No. 2 Construction Battalion to Canada`s 1914-1918 war effort is featured in the largest exhibition ever to be mounted by the Army Museum Halifax Citadel. The exhibition, named The Road to Vimy and Beyond, runs until November, 2018, and honours the role that Canada, especially Nova Scotia, played in the Allied victory in 1918.

By spring of 1916, Canada’s flow of volunteers for military service was drying up alarmingly. Bending to pressure from the nation`s black community, the Militia Council authorized the formation of a black construction battalion to be headquartered in Nova Scotia, home to Canada`s largest black community. Command of the battalion was given to Lieutenant-Colonel D.H. Sutherland of River John, N.S., and the officers were white, with one exception. That exception was the unit padre, Capt the Reverend, William A. White, who made history as the first – and only – black commissioned officer in the British Empire during the war.

More than 500 members of the Nova Scotia’s black community stepped forward to serve with No 2 Construction Battalion, along with 165 African American volunteers. Early in 1917, the men were dispatched to New Brunswick to help lift rails from the Grand Trunk Railroad so they could be shipped to the Western Front battlefields in Europe. Here again, the No. 2 Construction Battalion made history as the only volunteer unit to engage in war-work, before actually shipping overseas.

In 1992, the Government of Canada designated the No. 2 Construction Battalion an event of national historic significance and, the following year, a commemorative plaque marking this honour was placed in Pictou, NS.

By the end of the First World War, in addition to No. 2 Construction Battalion, more than 2,000 African Canadians served their country proudly.