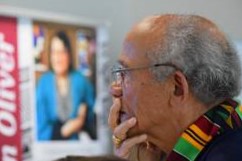 BIRCHTOWN, N.S. – People from across Nova Scotia made the Journey Back to Birchtown on July 14 and 15, where the 235th anniversary of the Black Loyalist landing in Shelburne County was celebrated and the late Reverend Dr. William Oliver and his wife Dr. Pearleen Oliver were honoured for their lifelong work for social justice in Nova Scotia.

A plaque was presented to their son, Dr. Les Oliver, of Wolfville, by Chuck Smith, president of the Black Loyalist Heritage Society that read: “In grateful recognition of Rev. Dr. William and Dr. Pearleen Oliver for their outstanding achievements as activists, and community and religious leaders, their contributions have impacted and formed our past, present and future.”

For Dr. Oliver, seeing his parents’ many accomplishments over the years highlighted in the display at the Black Loyalist Heritage Centre and the honour being bestowed upon them gave him the opportunity to think back on the lives of my parents.

“When I look back it is with great admiration that I think of the fact that my parents started their work in 1936. They were just married. Father had just graduated from university, they were getting ready to start a family, they had a nice home, father had a job in Windsor Plains… they were living the life,” he said. “Then they were invited to step up to the plate and did they step up to the plate big time. So, the fact that they were so young is of admiration. They worked for over half a century and continued working up to the times of their deaths, my father in 1989 and my mother in 2008.”

The Olivers were instrumental in developing the Nova Scotia Association for the Advancement of Colored People in 1945, the Nova Scotia Human Rights Commission in 1967, the Black United Front in 1969 and the Black Cultural Centre 1983. As a historian, Dr. Pearleen Oliver also wrote and published the history of Blacks in Nova Scotia.

“My parents didn’t seek personal glory or offices for themselves during their lifetimes, that why it’s a pleasure to me to think about having the chance to recognize them now, to see the effort that has been done here,” said Dr. Oliver. “Their accomplishments serve as a reminder to our children and grandchildren that no station in life is beyond them simply, because of their racial heritage.”

Dr. Oliver said his mother “was a person who believed that humans had immense potential and that given a bit of training and an opportunity that you can do whatever you want. You can move mountains.”

In 1944, as a young mother in her 20s and a high school graduate, she was out speaking to anyone who would listen, said Dr. Oliver, quoting his mother from an article in the Halifax Herald of the time where she was addressing a luncheon meeting of the Halifax Wise Men Club. “Children should be taught from kindergarten that given equal opportunity, every race is equal,” she was quoted as saying.

‘“We have made progress as no one can deny.’ That was quoted from 1944 at a time when my parents were keenly aware that African Nova Scotians were facing difficulties with housing, employment, health care. They realized all these things could be improved with education and equality of opportunity. They took such great pleasure in seeing people get trained and after they got trained go on and succeed.”

Dr. Oliver said in 1943 it was well known that Blacks were denied entry into many kinds of work. During his mother’s conversations with girls and women, there were many who said they wanted to be a nurse.

“That was her dream when she was a kid, but found out no, that role isn’t open to you because the Blacks were not permitted admission to nursing schools. So, she launched a persuasive campaign, public speaking, letter writing, radio interviews, and meeting with people in power who controlled the nursing schools. By 1946 the rules were changed. By 1948 there were graduates. This was a Canadian first.”

As one of five sons, “they somehow managed to have all five of us head in a direction that we selected,” said Dr. Oliver. “We were told you can do what you want…Their urge to teach was characterized in their church work, their adult education work, their recording of history, and community development work throughout the province…we will bring the education to where you are and that was probably a major part of their philosophy. We’ll meet you where you are, we will help you see where you want to go, and how to get there.”

Dr. Oliver said his father is quoted as saying, “‘I think a good leader is one who can assign tasks, who is able to involve other people and is sensitive to the personal aspirations of other individuals. This way he is able to motivate people and that, I think, speaks to the essence of their work,” he said. “It was to motivate people to believe that with the appropriate skills they could do what they wanted, and on the other side, my parents were very skilled at helping to remove obstacles.”

“To our younger people I want to say my parents would have you know that each of you can develop your special skills to help build a better world, and you should remember the opportunity exists for each young person to be a successful, satisfied member of their community. They would want each of us older ones to use every bit of our energy to make sure the young people are not stifled in their attempts to realize their goals and obtain everything they care to dream.”